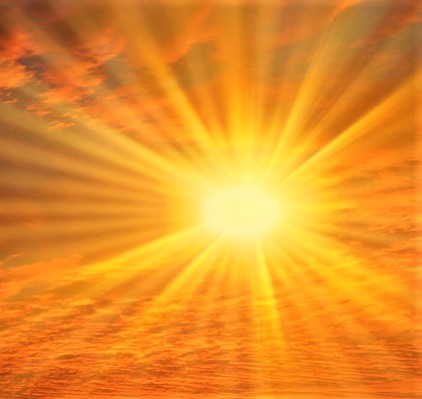 Since the origin of human existence outside of “Eden”, man realized that the sun provided warmth (heat). Even wild and domesticated animals quickly experienced the effects of full sunlight as compared to being in shady surroundings.

In the ensuing centuries methods of storing heat, such as filling jars with water or stacking stones or bricks in sunlight, extended the benefits of solar energy for a prolonged period after sunset. That same sunlight helped in the drying of animal skins for clothing, meat for eating and, after wearing apparel was washed – using the old fashioned clothes line for drying.

More recently, seeking to develop “alternative” ways to charge the batteries used in their myriad of space vehicles, NASA participated in the development of the “PhotoVoltaic” system. This functions similarly to a battery except, by the combination of certain chemicals and specialized natural elements, the sun shining on the panels causes a “flow” of electric energy that in turn charges the on-board batteries and in some applications, replaces the batteries completely.

It wasn’t long after the NASA solar development that people explored the possibility of using solar electricity, or PhotoVoltaics, in the home or in business and industrial applications. Initially, as is usually the case with most new methods and devices, the cost was prohibitively high. However, production costs of solar cells, panels and associated equipment has fallen over time, making solar power more enticing and affordable.

Statistics have shown that a whole-home PhotoVoltaic system will pay for itself in just several years. And, while reducing the electric bill to virtually nothing, you are helping to control emissions and pollutants that would otherwise endanger the environment by the use of non-renewable fossil fuels – there are NO harmful emissions from a solar system, just clean free God-given energy! And, in most areas excess or “over-flow” of energy can be fed to the grid and sold to the local power companies.

Industrially, since solar parts don’t wear out (except for possibly replacing batteries after a decade or longer) there is no overhead or maintenance required compared to commercially provided power services, further enhancing the “green” effect.

Western Carolina Solar has embarked on a program of producing in these Carolina mountains a more efficient solar cell as well as some new unique designs and methods of harnessing and utilizing the energy from the sun. We are not re-inventing the wheel, just making it better, and more efficacious!

Our intent is not to be an installation company but to manufacture the various parts that go into the completed panels which we will make but that will be installed in the field by others. Occasionally we MAY be involved in some unique installation applications that may have no precedents.

Our goal, rather goals, include exploring and hopefully developing even other methods of producing “alternative energy”. In it’s basic concept, that means providing “free” energy from other than non-renewal sources, like oil, gas (including fracking), coal and any item that, when used up, cannot be replenished.  The alternatives include, in addition to solar rays for electricity as well as steam from concentrated hot water systems, hydrogen fuel cells for automotive and home use, wind, geothermal sources (hot water and steam, from the heart of the earth: I.E.,  geysers), wave generation – using the motion of the waves in the oceans and seas, plus a number of other methods and potentially some future  processes not even yet imagined!

WCS realizes that not all those sources of “new” power shown above are feasible for implementing in this area, so we are tending to try developing those that are more reasonable for us to research.

We have very few geysers or thermal emissions in these mountains! For decades wind turbines were experimented with in the Boone, NC, area but with the enormous size and constant roaring noise, it is not practicable here. And the wind is not as steady and dependable as it is in the Western Plains states. However some of the other methods may be worth checking out. Wave generation in the Bahamas and coastal areas and fuel cells for home use could prove viable. Solar energy is seen in just about any location!

Nuclear power plants, the most effective and efficient source of renewable power, have been around since the 1950’s but with a questionable track record of safety and as a possible source of pollution (as examples, Chernobyl in Ukraine in 1986 and Three Mile Island near Harrisburg, PA in 1979), many have been decommissioned due to public outcry. A nuclear “leak” is similar to a large airliner crashing with 400 people aboard—it doesn’t happen often but when it does, a large area of the population is concerned!

So, with a good source of raw materials and an available workforce that can be retrained to function in “high tech” manufacturing, Western Carolina Solar, LLC has settled in this area. With the incredible natural beauty here, four-season weather and lots of outdoor recreational opportunities make this mountainous area ideal for creating “Silicon Mountain”, a take-off on the Silicon Valley in California!

Care to join us?

In the near future we will be sharing on this WEB site our progress in the field of “Alternative Energy” as well as displaying a catalog of purchasable items and/or locations where you can see these devices in operation and available to be bought.

This site uses Akismet to reduce spam. Learn how your comment data is processed.